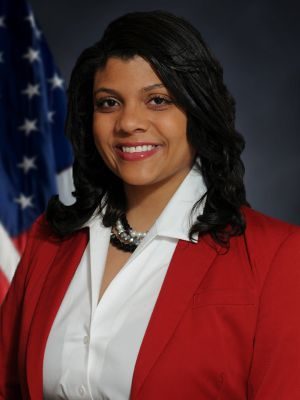 In 2018, Britnee N. Timberlake was sworn in to serve as a member of the New Jersey General Assembly, representing the 34th Legislative District, comprised of Clifton, East Orange, Orange, and Montclair. She serves as Vice-Chair of the Community Development and Affairs Committee and a member of the Housing Committee. Timberlake is the youngest state legislator in both the New Jersey Senate and Assembly.

Assemblywoman Timberlake has sponsored numerous bills to improve the quality of life for all. She was the first elected official (as then Essex County Freeholder Board President) in the state to pass a resolution in support of raising the minimum wage to $15.00 an hour. In 2018, she finished the fight for $15 as a prime sponsor of A-15, which was signed into law by Governor Murphy in January 2019.

In January 2019, also signed into law was Timberlake’s hard-fought policy requiring an independent investigation if a person loses their life during an interaction with or while in the custody of law enforcement. As one of the first of its kind, this groundbreaking law garnered the support of the American Civil Liberties Union, the People’s Organization for Progress, the New Jersey State NAACP, the National Organization of Black Law Enforcement Executives, New Jersey Working Families, Faith in New Jersey, and countless other advocacy groups. Furthermore, in 2018, she worked with East Orange Mayor Ted Green to finish getting a bill passed banning the sale of realistic toy guns. This law was created in response to the unfortunate death of Tamir Rice and signed into law by Governor Murphy in January 2020.

After reports of unprecedented infant mortality rates and lack of access to prenatal care amongst women of color in New Jersey, Assemblywoman Timberlake authored legislation that was a part of a host of bills signed into law to combat these shocking health disparities. She successfully advocated for the passage of the following laws: requiring hospital emergency departments to ask any person of childbearing age about their recent pregnancy history; mandating health benefits coverage for fertility preservation services under certain health insurance plans; mandating health benefits and Medicaid coverage for breastfeeding support; and screening of newborn infants for spinal muscular atrophy, to name a few. She is currently challenging the real dedication to the notion of a “woman’s right to choose” by pushing for insurance companies to pay for safe, regulated home births performed by midwives. Since home births are not covered by insurance companies, this $10,000 plus out-of-pocket procedure has become more accessible to wealthy women when it should be an option for all women who desire and are healthy enough to have a home birth experience, including those who do not have thousands of dollars on hand.

As a seasoned housing advocate, Assemblywoman Timberlake has successfully advocated for the full restoration of funding in the Affordable Housing Trust Fund, a critical asset for creating and maintaining affordable housing throughout the state. She passed a law prohibiting landlords from requiring tenants to pay rent and other related charges through electronic funds only, so people who may not have the technology to pay rent virtually can still make payments. During the COVID-19 pandemic, Timberlake has been on the front lines fighting for homeowners, renters, and landlords to keep a roof over their heads by authoring “The People’s Bill,” which gained the support of over 150 housing advocacy groups.

On the technology front, Timberlake worked to ensure that students throughout the state have access to STEM education by expanding funding for STEM education resources. Moreover, to protect our students, she passed a law prohibiting online education services from using students’ data without their permission. Before discussing the “digital divide” became popular and necessary because of the pandemic, Timberlake wrote a bill to plan how to provide free statewide public internet, so no household is kept from accessing information because they cannot afford to pay for it.

Assemblywoman Timberlake is no stranger to public service. From 2015 to 2017, she served as President of the Essex County Board of Chosen Freeholders representing District 3 – East Orange, Orange, South Orange Village, and parts of Newark. While leading one of the largest counties in the state, Timberlake managed a budget of over $700,000,000.00. At the time, she was the youngest and the only sitting African-American female President of a Freeholder Board in New Jersey, although not the first.

During her tenure as Freeholder President, Timberlake authored a revolutionary affirmative action law that established a set-aside and joint venture program to level the financial playing field and increase economic opportunity for women-owned, minority-owned, and veteran-owned businesses. Timberlake also created a law requiring all banks the county conducts business to provide evidence of their efforts to reduce foreclosures, give loans to entrepreneurs, assist low-to-moderate-income communities, and more. Additionally, she spearheaded the Essex County Clean Jobs Initiative, a law that established job training and placement for Essex County’s unemployed and underemployed residents in the highly specialized and lucrative field of environmental lead, asbestos, and contamination remediation. Furthermore, when public safety has been a national focus, Timberlake successfully advocated for the Sheriff’s Department to obtain body cameras for all officers.

In addition to her public office career, Timberlake is the founder of the Essex Community Land Trust, a nonprofit organization that provides permanent, affordable housing and financial empowerment opportunities for working-class families throughout Essex County. Assemblywoman Timberlake holds a Bachelor’s degree in Political Science with a minor in Religious Studies and a Master’s degree in Public Administration, all from Seton Hall University. She previously served as an AmeriCorps Member in Union County and housing chair of the Montclair NAACP.

Assemblywoman Timberlake is the proud daughter of Philip Timberlake and Cathy Walsh Timberlake. Her father served as a Sergeant in the U.S. Army’s 82nd Airborne, and her mother was an educator of the mentally and physically challenged. Through their example of service, she has dedicated her education and professional career to helping people. She resides in East Orange with her family, is the proud other- half to a Newark Fireman, was sworn into the Assembly while nine months pregnant, and is the mother of two children. Timberlake gives all glory to God for her life and stands on the word from Philippians 4:11-13.