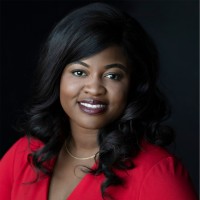 Deidre DeJear is an entrepreneur and social activist with over 10 years of experience assisting small businesses and community organizations.

In 2008 she started her own small business, Caleo Enterprises, which has provided over 400 entrepreneurs and nonprofit organizations with affordable marketing tools and business strategies. Deidre was the Iowa African-American Vote Director in the 2012 campaign to re-elect President Barack Obama. She developed and implemented a program to educate, motivate, and mobilize low-propensity voters.

Her engagement began managing the United Way of Central Iowa’s Financial Capability project. Over the last 5 years, Deidre has developed and implemented a collaborative that targets low to moderate income individuals and families, giving them access to mainstream financial systems & products and increasing their financial management knowledge and skills.

In 2018 Deidre became the first African American to be nominated by a major party in a statewide election in Iowa. As a candidate for Secretary of State, Deidre earned over a half a million votes. Most recently, Deidre served as the Iowa Campaign Chair for Senator Kamala Harris’ presidential campaign.