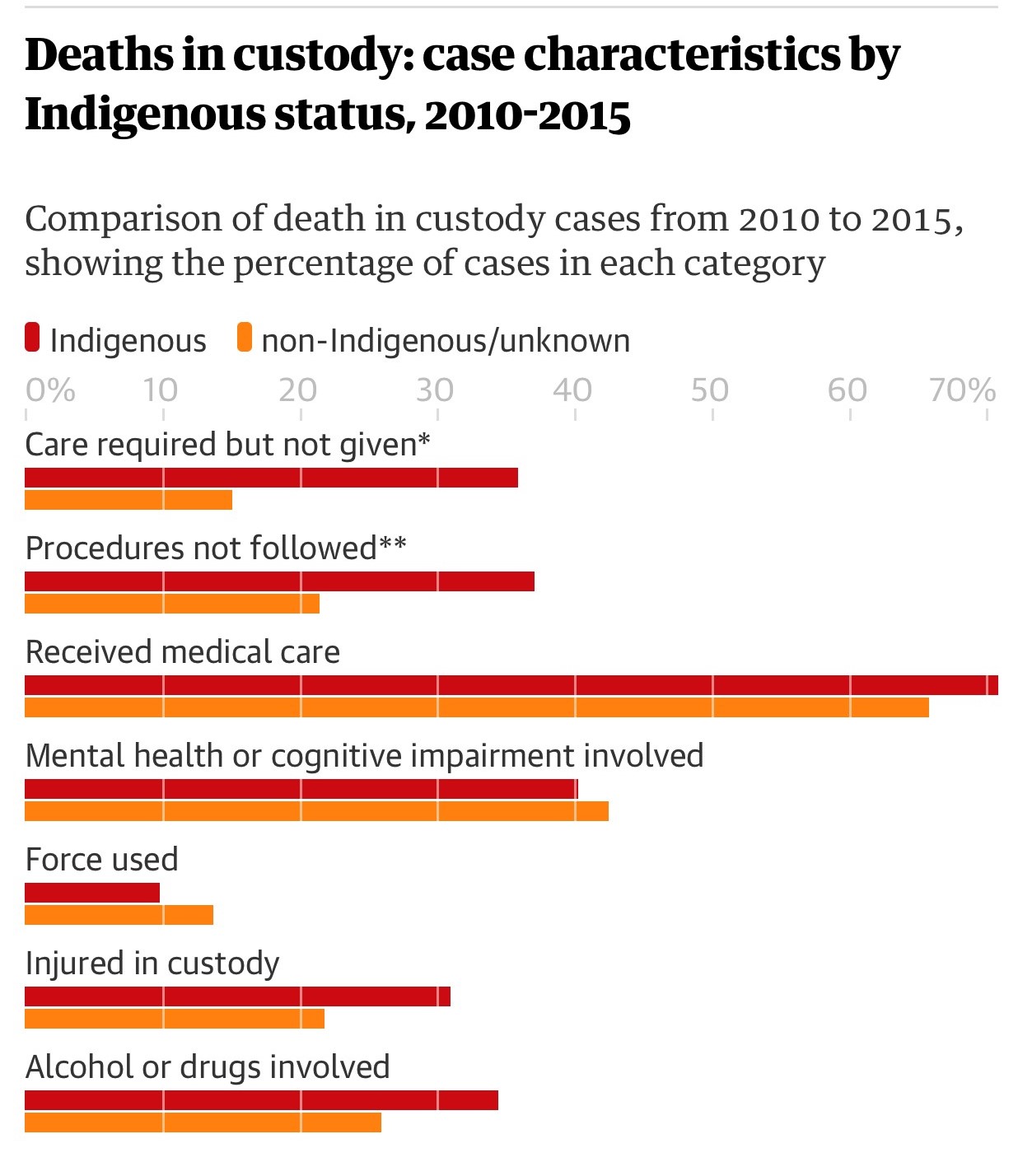 Australia’s record on Aboriginal deaths in custody is a driving force behind protests due to go ahead this weekend in Australian cities, as people turn out to march in solidarity with the Black Lives Matter movement globally.

Today, Guardian Australia has published an update to Deaths Inside, our database of all Indigenous deaths in custody from 2008 to now.

We found there have been at least 434 deaths since the Royal Commission into Aboriginal Deaths in Custody ended in 1991.

Our most recent analysis, based on today’s figures, shows:

In 2018, Guardian Australia’s reporting team collected and analysed all available coronial data and other sources to build this searchable database. The aim was to make the information as accessible as possible, and monitor systemic issues such as the provision of appropriate medical care.

A year later, in August 2019, we updated it again. On several measures, we found things had grown worse.

On Monday, the family of David Dungay Jr, who say the 26-year-old Dunghutti man died in similar circumstances to George Floyd, expressed solidarity with protesters on the streets of major US cities following the death of the unarmed black man. At the same time, the prime minister, Scott Morrison, told a Sydney radio station he was glad such things didn’t happen here.

“As upsetting and terrible that the murder that took place – and it is shocking, that also just made me cringe – I just think to myself how wonderful a country is Australia,” he said.

“There’s no need to import things happening in other countries here to Australia. Australia is not the United States.”

Of all states and territories, the ABS said, Indigenous imprisonment rates were highest in Western Australia.

At least seven Aboriginal people have died in police and prison custody, and yet more previously unreported deaths have come to light. Two of those deaths were police shootings, both resulting in murder charges currently before the courts.

In South Australia, we learned of one family who have been waiting more than five years for the results of a coronial inquest into the death of their loved one, a 68-year-old man who died in Yatala labour prison in April 2015.

The inquest into the death of Wayne Fella Morrison, a Kokatha, Wirangu and Wiradjuri man who died in the same prison in 2016, has been delayed for two years because 18 prison employees claimed legal privilege against answering self-incriminating questions.

In the case of Tanya Day, a Yorta Yorta woman who was put in a police cell, officers told the coronial inquest they were acting out of concern for her welfare, yet only one officer considered – then dismissed – seeking medical treatment. The coroner, Caitlin English, noted: “Ms Day’s death was clearly preventable had she not been arrested and taken into custody.”

The information in this database is from published coronial findings. Where an inquest is yet to be held or unfinished, the information is drawn from media reports, press statements by police or justice departments, and occasionally interviews with families. We have endeavoured to link to primary sources wherever possible.

“The fact is that the royal commission released almost three decades ago said that to stop Aboriginal deaths in custody we must stop putting Aboriginal and Torres Strait Islander people in prison,” the Change the Record co-chair and CEO of the National Aboriginal legal service (Natsils), Cheryl Axleby, said.

“Overwhelmingly state and territory governments have failed to take the necessary steps to do this.”

Both Natsils and Amnesty have called for an end to the “practice of police investigating police”.

“There needs to be an independent body that investigates these incidents and a fundamental overhaul of our approach to justice in this country,” Amnesty’s Indigenous rights adviser, Rodney Dillon, said.

Labor’s Linda Burney said it was unacceptable that Indigenous people remain overrepresented in the justice and out-of-home care systems, and is calling for the government to respond to the Australian Law Reform Commission’s Pathways to Justice report.

The federal Indigenous affairs minister, Ken Wyatt, said he was working with the Coalition of Aboriginal and Islander peak organisations on “more ambitious” incarceration and detention targets, in a refreshed Closing the Gap agreement at the end of July.

“I have seen what can be done when we come together and work constructively to achieve our goals,” he said. “I would ask that everyone continues to treat each other with respect and tolerance.”

*Original Source from The Guardian: “Aboriginal deaths in custody: 434 have died since 1991, new data shows”