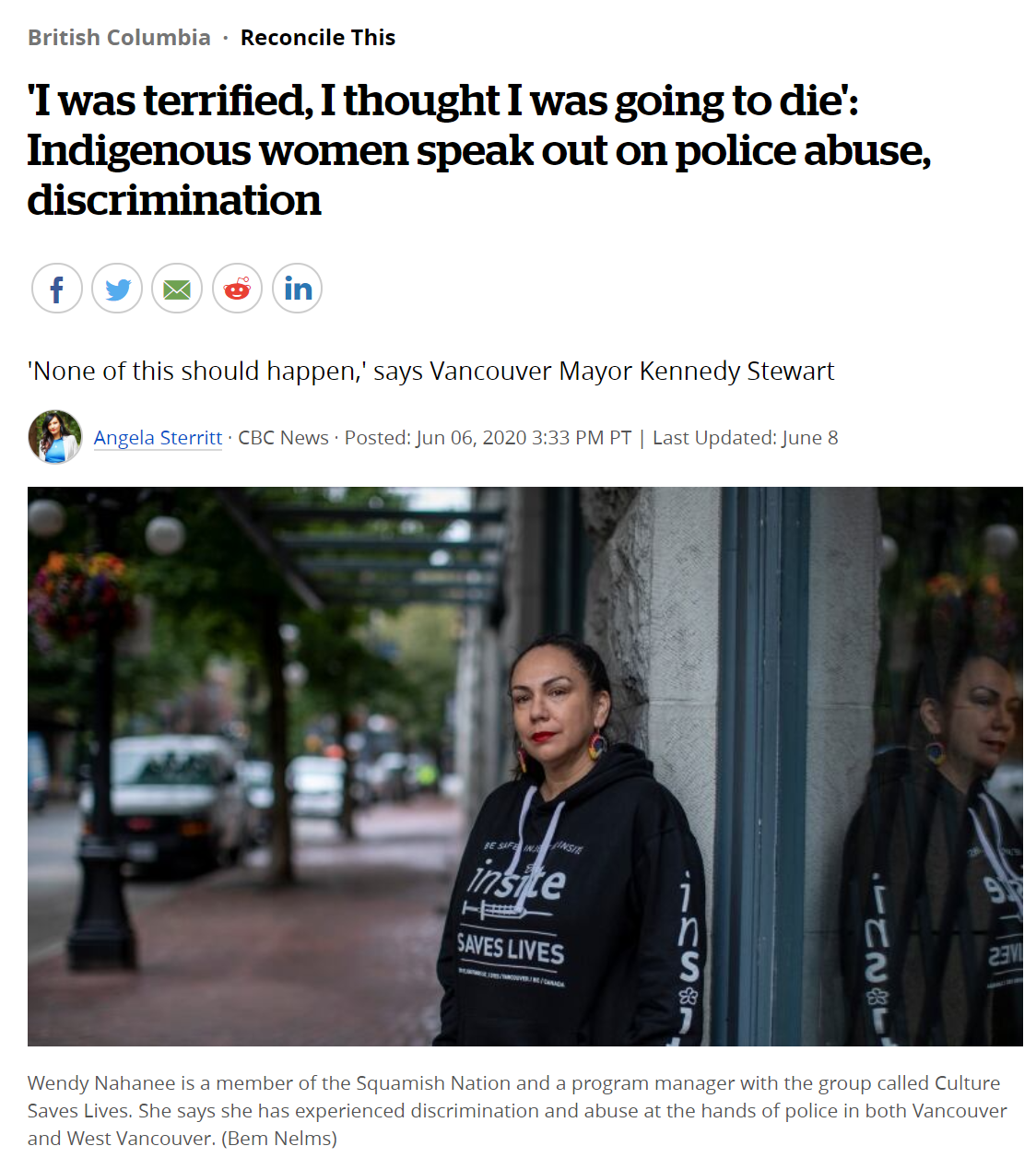 As protests erupt across North America following the murder of George Floyd at the hands of a Minneapolis police officer, Indigenous women are speaking out about discrimination and violence they have experienced by police in British Columbia, saying not enough is being done to address racism in the forces.

“They are very afraid of the police,” says Cree lawyer Amber Prince, who represents a number of Vancouver Indigenous women who say they have been abused and discriminated against by police.

Prince won a B.C. Human Rights Tribunal case for Deborah Campbell, an Indigenous woman who was dragged at least 20 feet by a Vancouver police officer in 2016 when she tried to peacefully witness her son being arrested. He was later released without charges.

“Since the decision, I have heard from women who say they were assaulted by police, that police have used excessive force against them, that they have been given bylaw tickets that appear to be baseless,” Prince said.

‘None of this should happen’

The Vancouver Police Department declined an interview with the CBC and refused to answer specific questions, but in a statement said officers already partake in training about the oppression of Indigenous people and take anti-bias and anti-racism training.

Vancouver Mayor Kennedy Stewart — who is also the chair of the Vancouver Police Board — says he knows there are problems within the city’s police service.

“None of this should happen,” Stewart said.

Still, he agrees with Amber Prince and others who say the VPD desperately needs to improve its relations with Indigenous people.

“It’s our job as a board to put the policies in place and make sure that everyone is treated equally and protected,” he said.

He acknowledges that having more diverse officers and board members will ultimately help reduce racism in the police ranks, adding that training is on the way, once restrictions around COVID-19 are loosened.

“We have developed a new course with Reconciliation Canada, through the Justice Institute that all new recruits will go through,” Stewart said.

He also mentioned that executives within the VPD would be provided with similar training but remained vague about the training of more senior officers.

The CBC has learned that the VPD’s decision to work with Reconciliation Canada came after an incident in December where an Indigenous grandfather and his 12-year-old granddaughter were handcuffed outside a BMO branch after an employee suspected them of fraud. The pair was released with no charges.

‘I tell my son to run from the police’

For some Indigenous women though, the forthcoming training provides little comfort.

Wendy Nahanee is a Squamish woman who works in the Downtown Eastside of Vancouver as a program manager with the group Culture Saves Lives.

When she and her son were assaulted in what she calls a racially motivated attack, she says the Vancouver police didn’t meet with her to take a report, failed to follow up, and she felt they disregarded her complaint.

But it’s another incident from the ’90s that instilled a life-long fear of police in her.

She was driving with friends from her reserve in North Vancouver to the Park Royal Mall when the West Vancouver police pulled her over for a traffic violation.

“One of the people in the back seat didn’t have their seatbelt on, so they shuffled to put it on,” Nahanee said.

That’s when she said the officers became suspicious.

“They pulled me out of the car by my hair, threw me on the ground with a gun in my face asking what gang I was affiliated with,” she said, noting she has never been involved with any gang.

“I was terrified, I thought I was going to die,” she said from her current home in Vancouver.

“We have an understanding that there’s a long history and long-lasting effects on those who experienced the hardship and horrific events at the hands of police,” said Constable Kevin Goodmurphy.

Nahanee understands all too well what he means by long-lasting affects.

“I tell my son to run from the police,” she said.

“As a person of colour, you are a target … everyone else is told to go to the police, they are here to protect you, but it’s the exact opposite for Indigenous people.”

*Original source from Angela Sterritt |CBC News, “I was terrified, I thought I was going to die’: Indigenous women speak out on police abuse, discrimination