How an International Fad

Little Magazines of the 1890s

to the Scholarly Canon” 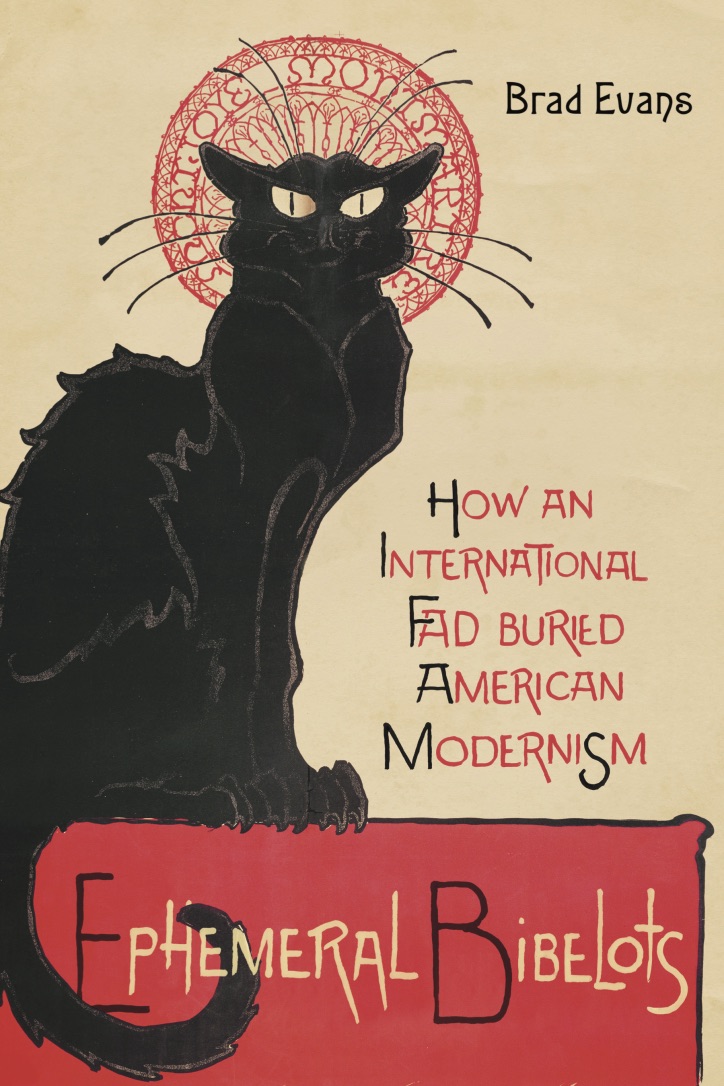 Emanating from the cabarets of modernist Paris, a short-lived vogue spread around the world for avant-garde journals known in English as “ephemeral bibelots.” For a time, it seemed as though all the young bohemians passing through Paris would go home and start their own bibelots modeled on Le Chat Noir, the esoteric magazine of the famed Montmartre cabaret. These journals were recognizable for their decadence, campy queerness, astounding art nouveau illustrations, fin-de-siècle color schemes, innovative typefaces, and practiced bohemianism.

In Ephemeral Bibelots, Brad Evans relays the untold story of this late-nineteenth-century craze for bibelots, dusting off a trove of periodicals largely untouched by digitization. In excavating this now-forgotten archive, Evans calls into question the prehistory of modernist little magazines, as well as the history of American art and literature at the turn of the century. Considering how artistic movements take shape, move, and are forgotten, the book is organized around three major themes—”vogue,” “ephemera,” and “obscurity”—with authors and artists to match. A full-color insert reveals a glorious array of bibelot covers.

This revisionary history of print culture incorporates discussions of pragmatist philosophy and relational aesthetics; women writers like Juliet Wilbor Tompkins and Carolyn Wells; the graphic artists Will Bradley, Louis Rhead, and John Sloan; the dancer Loie Fuller; and twentieth-century figures like H. L. Mencken, Amy Lowell, and Anita Loos. Bringing nineteenth-century American literature and culture into conversation with modern art movements from around the world, Ephemeral Bibelots provides new ways of thinking about the centrality of various media cultures to the attribution of aesthetic innovation and its staying power.

“With delightful verve, Brad Evans gives us a whole new insight into the role of small magazines in the creation of modern literature. Arguing for the importance of circulation networks, Evans shows how ephemeral bibelots—small format, short-lived journals—created trends in modern literary production that grew out of dynamic social relations. Popular, faddish, and fashionable, these publications fostered the emergence of new concepts of gender, sexuality, and literary identity that then became part of mainstream literary modernism. By providing a vivid picture of these publication circuits, Evans’s study shows how artificial it is to separate the canon of modern works from their distributed and complex conditions of reception and production. Wonderfully written and highly readable, this book embodies some of the feeling of fin-de-siècle flights of aesthetic fancy of the era on which it is focused.” — Johanna Drucker, University of California, Los Angeles, author of Graphesis: Visual Forms of Knowledge Production

“You’ve probably never heard of a bibelot before, but in this fascinating book on the subject, Brad Evans proves there are no more excuses. These playful, punchy periodicals, which numbered in the hundreds, were circulating avant-garde art and criticism in the 1890s before modernism arrived on the scene. And if they share the DNA of little magazines and other avant-garde publications, bibelots are a print medium in their own right with a unique story to tell about how networked literary and critical cultures take shape. By rescuing them from oblivion, Evans has rediscovered a lost corner of the literary ecosystem―one that will continue to inform how we imagine, understand, and theorize the concept of ephemerality within literary cultures and across different media technologies far into the future.”—Eric Bulson, Claremont Graduate University, author of Little Magazine, World Form

“This book’s consideration of a minor fad makes major interventions in scholarship on both late nineteenth-century American literature and modernism. Evans produces a convincing and lucid account of the resistance of these magazines to the realism/naturalism of their cultural moment, recuperating forgotten literary figures and bringing fresh perspectives to familiar ones. His style, much like the bibelots he considers, will surprise and delight readers with its intellectual playfulness and dexterity.”—Kirsten MacLeod, Newcastle University, author of American Little Magazines of the Fin de Siecle: Art, Protest, and Cultural Transformation

“This accomplished book makes an original contribution to the long history of modernism, assembling a rich, fascinating archive of late-nineteenth-century print culture and developing an inspired and persuasive argument about both its importance and its invisibility to literary and cultural history. Combining extraordinary research with terrific illustrations, witty writing, and skillful exposition, Evans brings this archive vividly to life, making learning about these ephemeral works exciting, suspenseful, and oddly moving. A genuine pleasure to read.”—Thomas Augst, New York University, author of The Clerk’s Tale: Young Men and Moral Life in Nineteenth-Century America

You can preorder the book at the links found here.