R-Pulsar is an IoT Edge Framework, that extends cloud capabilities to local devices and provides a programming model for deciding what, when, and where data get collected and processed. It has been deployed and tested on embedded devices (Raspberry Pi and Android phone) and presents an experimental evaluation that demonstrates that R-Pulsar can enable timely stream analytics by effectively leveraging edge and core resources.

DIET and its plug-ins allow job dispatching in data centres based on energy-related criteria. If case of peaks regarding the energy consumption, jobs can be migrated dynamically to another node. DIET offers a multi-criteria and dynamic dispatching method that is extensible to large computing systems.

We coupled the scheduling process to the provisioning of resources while taking into account energy-related events such as fluctuations of electricity prices or heat peaks. This feature [1] enable autonomic decisions from the scheduler by checking pre-defined threshold before executing placement/provisioning decisions.

The reduction of energy consumption has become a real challenge, as the demand for Cloud infrastructures increases dramatically, urging for solutions to mitigate both the economic and environmental impact.

The NUVEA Platform enables Cloud providers and users, to benefit from the Cloud Power ,while reducing their costs and carbon footprint.

NUVEA has been awarded by the European commission through the very selective H2020 ICT Disruptive technologies program. This award highlights its potential to become an European Cloud services provider.

The adoption of cloud computing is still limited by several legal concerns from companies. One of those reasons is the data sovereignty, as data can be physically host in sensible locations, resulting in a lack of control for companies.

Flauncher [1] is a set of scripts leveraging the Grid’5000 software stack; it enables users to easily start a large amount of KVM VMs on several sites of the testbed. These VMs can be used at user convenience, for example to investigate particular concerns, such as the impact of migrating a large amount of VMs simultaneously, or to study new proposals dealing with VM image management.

The logical steps of a deployment are depicted in the Figure 1 and described hereinafter. 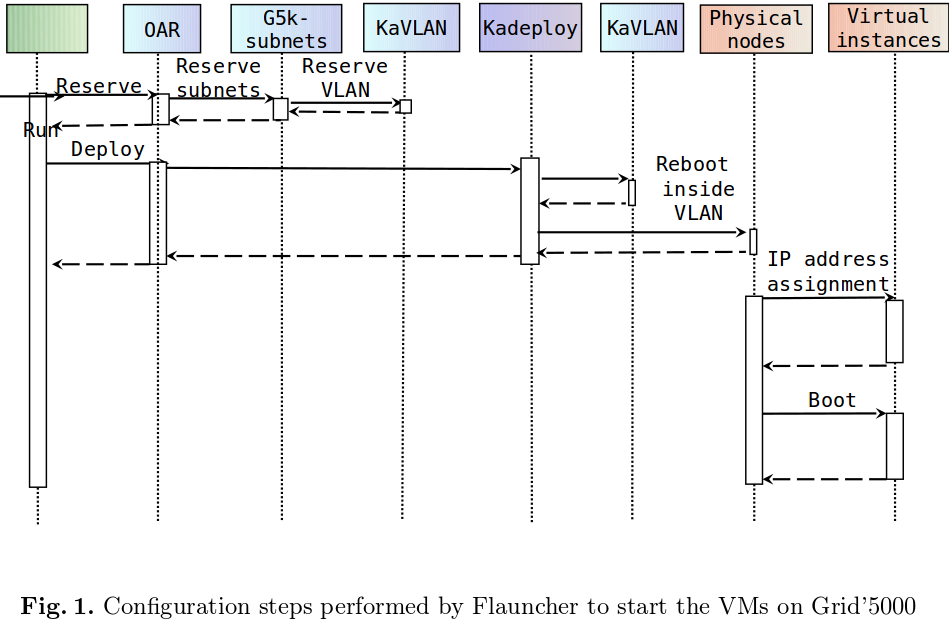 Booking resources: The first script is in charge of finding available nodes that support hardware virtualization, booking them and requesting network resources.

Creating and booting the virtual machines: The virtual instances are created and booted in parallel on all the worker nodes. Worker nodes and virtual machines are checked at each step to detect potential failures; in that case, the step is performed again on the faulty components with a determined amount of retries. Communications are performed using tree-based tools; this approach ensures scalability and allows users to simultaneously run a script on multiple nodes and/or gather information.

The largest experiment conducted up to now involved 10240 KVM VMs and 512 nodes distributed across 10 clusters on 4 different sites. Flauncher has been used in particular to validate DVMS [2].

Web application, sometimes developed in an incremental and iterative manner, may result in a poor organization of program codes. For a better modularization, the notion of aspect can be introduced. This project demonstrates the idea with an example case of Web application development by using AOWP [1], a new AOP framework for PHP programs.