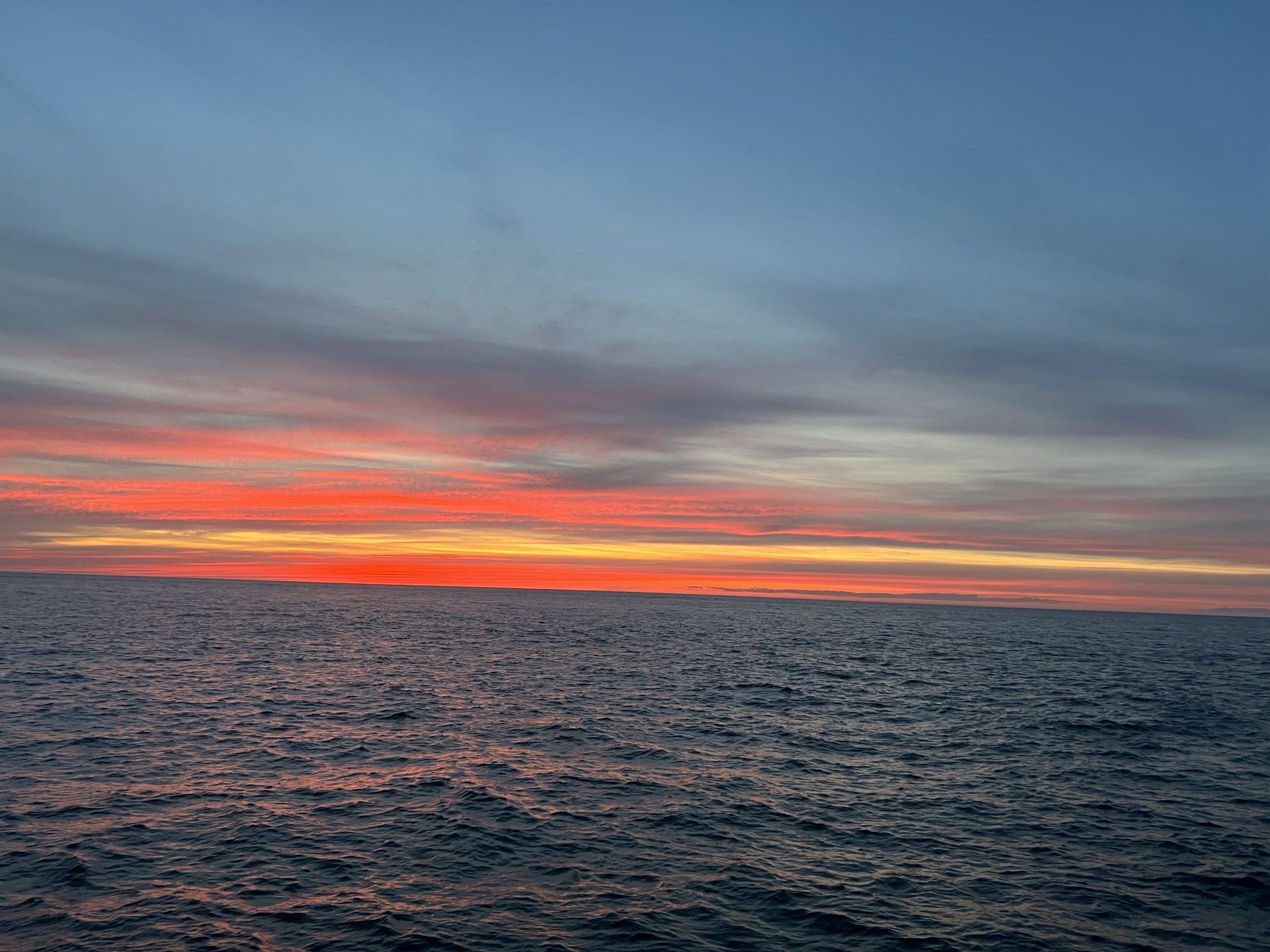 Summertime in Northeast United States, warm weather, pop up thunderstorms, humidity, and a bright sun, right? Well those terms for June are pretty accurate for the beach towns all along the Northwest Atlantic Ocean, but not for the team on the R/V Atlantis the summertime feel is more like an early spring day at best.

The weather on ship has changed quickly at times, on our first day at sea we had great dolphin watching weather, while just 1 hour later when we went to the bow to watch the sunset all we could see was fog. On Saturday 6-4-22 NOAA identified the day as starting with a weak cold front that will approach the waters and move east across the area Saturday night, and it definitely did. Our Saturday morning core training was sunny, with some wind, hoodie and jeans kind of weather, while our afternoon training on CTD’s was still sunny but much cooler. I wanted my gloves, hat, and another hoodie.

We were then predicted to have a high pressure system build across the waters Sunday, into Sunday night, and persist over the region Monday into Tuesday. Whether the high or low came in I can’t be sure, but I know the seas 300 miles or so off of Nova Scotia were very calm. Monday early morning had some stronger winds and while in my berth I felt some rocking. The winds decreased and the day was really nice.

The high slowly shifted east and northeast of the area later Tuesday and Tuesday night as another cold front approached from the west. I know the air and water temperatures were a bit colder, but the seas were calm. The sunset was amazing.

Wednesday was more of the same great weather. Many of use couldn’t believe how smooth the seas were.There was a front that moved near the coast Wednesday, and began to slowly move offshore, toward us Wednesday night.

Fortunately we started our research just below Nova Scotia, in the United States Northern Atlantic waters. Had we stayed off of Massachusetts or been coring off of New Jersey first we would have been delayed due to a projected tropical storm. Potential Tropical Cyclone One, in NOAA reports was to pass well south and then southeast of the area as a tropical storm Sunday through Wednesday afternoon we had clear skies and flat seas. The air temperature several hundred miles off of Nova Scotia was in the 60s.  Then that all changed as we finished up with our sampling stations to the North. It was time to head south toward the coasts of New Jersey. We had rain and the sea conditions worsened leaving many feeling sea sick and the deck too rough to move core samples from one location to another. The front moved to near the coast Wednesday, and began to slowly move offshore Wednesday night, when the seas got rough.

We completed our sampling of Nova Scotia Wednesday and prepared to move into the storm by steaming south, which is estimated to take 2 plus days. We had work to do with previous samples but the deck conditions were too rough to carry sediment cores across the deck. We did what we could overnight Wednesday all the way to Thursday.

The plan included stopping at one station to sample water, in the ocean parallel to New York, but the weather delayed us. Instead of reaching our point on Thursday afternoon, we didn’t make it until Thursday at 11:30pm EST. The ship had spent the day steaming directly into a storm front. Seas swelled to 8 feet with higher surges around 12 feet.

Throughout the day Thursday the air got warmer and the humidity increased. However, warm temperatures didn’t help the seasickness. Many of the research team were sick or felt uncomfortable.  When we reached the planned CTD station the seas didn’t feel as bad and the rain had subsided. Though the seas weren’t as bad, most people didn’t recover from seasickness that quickly, so a small team worked with the Atlantis crew to put the CTD (conductivity, temperature, and depth) rosette overboard. While we were waiting to put the device in we still experienced occasional big waves.

The captain sent down a message to strap things down as we would have a night of high seas as we had to move into the troughs of the waves to get to our next point. This was at midnight, just as my shift was ending so I went to sleep, rocked by the ocean.

Friday June 10th around three o’clock in the afternoon we made it to our southern station to begin collecting sediment and water samples. The seas calmed but still looked a little choppy and the sun was shining. The sunset speaks for itself.

Saturday June 11th, steaming over some mid-depth coring options and moving southwest toward our deep coring location. We are in the gulf stream with warm air of 70 degrees Fahrenheit and water of almost 72 degrees Fahrenheit.

Saturday and Sunday were marked with warm waters and calm seas. Sunday morning’s sunrise was inspiring, as you can see from the night shift team picture below.

Sunday evenings sunset was blocked by a bit of cloud cover but the team didn’t mind as the air was warm. Early Monday morning we had light rain and a thick area of fog. Around 10AM we thought the fog would be burned off, but it wasn’t. Instead Monday turned into a hazy, humid, overcast day with calm seas. The sunset Monday evening had cloud cover with a glowing yellow and orange between the clouds.

Tuesday, the last day of the weather report for the trip, as Wednesday we will be in port off loading.  The sunrise was covered in a light haze of fog, the temperatures are warm, 67 degrees Fahrenheit, seas are calm at about 63 degrees Fahrenheit.