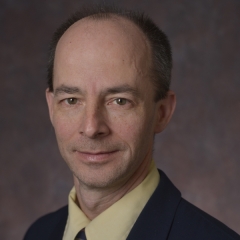 Charles M. Roth is a Professor with joint appointment in the Department of Chemical & Biochemical Engineering and the Department of Biomedical Engineering at Rutgers, The State University of New Jersey. Dr. Roth received his B.S. and Ph.D. degrees in chemical engineering from the University of Pennsylvania and University of Delaware, respectively. Following his Ph.D., he was a postdoctoral associate (1995-1997) at Massachusetts General Hospital and Shriners Burns Hospital, where he continued to work while appointed as Instructor in Surgery and Bioengineering at Harvard Medical School from 1997-2000.  In 2000, he moved to Rutgers, where he has established a research program focused on nanomedicine, with an emphasis on delivery of oligonucleotides and peptides. Dr. Roth has co-authored over 60 peer-reviewed journal articles and more than 160 conference presentations, and he holds six issued and one pending patent application. He founded and directed the undergraduate Biomedical Engineering Honors Academy from 2002-2006, served from 2006-2008 as Undergraduate Director for the Department of Biomedical Engineering, and was the founding PI and Director of an NSF-funded REU Site Program in Cellular Bioengineering: From Biomaterials to Stem Cells from 2009-2012, for which he remains a co-PI. Dr. Roth has received a number of major awards including the NSF CAREER, the 2008 Warren L. Susman Award for Excellence in Teaching (University-wide), and the 2015 Engineering Outstanding Faculty Award. Dr. Roth was inducted in 2013 as a Fellow of the American Institute of Medical and Biological Engineering.