at Rutgers Department of Linguistics

We provide a setting for graduate students to give practice talks in preparation for conferences and receive constructive feedback from faculty and peers. Beyond that, we regularly invite speakers to present current research and lead meaningful discussion.

We welcome any requests for practice talks or invited speaker nominations for Fall 2021.

Meeting time will be Thursdays 3-4:30PM.

Title: Limited Variable-force Modals and the Typology of Scal{ar,eless} Implicatures

Abstract: I show that exhaustification-based accounts of scalar implicatures, when combined with domain-restriction accounts of weak necessity modals, to directly and freely account for an otherwise puzzling and subtle pattern of variable-force modals in Kinande (Bantu J, DRC) without the need for additional stipulations within the semantic system. While prior accounts of variable-force modals have described languages with modals that vary between possibility and necessity, and rely either on domain restriction or exhaustification mechanisms to account for these patterns, I show that the Kinande modal anga shows limited variable force, between possibility and weak necessity. Furthermore, I demonstrate that the only way to account for the Kinande facts is with a combination of the domain restriction and exhaustification accounts, and that between these two (well-motivated) mechanisms we can fully account for the typology of variable-force modals.

Abstract: (1) Every year more people get vaccinated.
In its most salient reading, (1) is true so long as a growing number of people get vaccinated each year. Since it doesn’t require any external standard of comparison, this is often called the “internal reading” of the comparative (Beck 2000); it  has long been known to be resistant to compositional treatments.
This talk will first show how to derive the targeted internal reading in (1). Building on the essential idea in Bumford (2015) — interpreting lexicalized universals like “every year” as incremental dynamic conjunctions — I propose to use pair-based dynamic semantics to formalize these distributive operators and the comparative, where they both have access to the second dimension of meaning. The second part of the talk extends the proposal to other kinds of internal readings (cf. Brasoveanu 2011), licensed by conjunctions and event-pluralization markers. I will show that the pair-based dynamic semantics can derive these various sorts of distributive interpretations and provide sensible explanations to why only certain kinds of comparatives can be licensed by distributive operators other than lexicalized universals.

Title: Do rhetorical questions belong to the pragmatic wastebin?

Abstract:In an influential paper, Balusu (2006) proposes an analysis for reduplicated numerals in Telugu that can be extended to many other South Asian languages. Here, we extend Balusu (2006)’s insight into distributive reduplication to the domain of anaphors in Telugu. We start by observing that Telugu reciprocals and reflexives are reduplicated, much like those of Malayalam, as noted by Balusu & Jayaseelan (2013).  We then provide a unified analysis of both phenomena and suggest that much like distributed numerals, reciprocals and reflexives display distributivity by virtue of them being reduplicated. The end result is a step towards a unified analysis of reduplication in the nominal domain in Telugu.

Abstract: This talk investigates the semantics of comparatives without an overt standard phrase (henceforth “anaphoric semantics”). The empirical puzzle, building on the observation in Hardt and Mikkelsen (2015), is the following: sensitivity to the clausal content is observed on certain anaphoric comparatives (e.g. English “same” and “more”/”less” in amount comparatives ), but not on others (e.g. “more”/”different” in “a more interesting”/”different book”). A novel semantics of the comparative is built to explain these data: comparatives always compare two alternatives from the same domain; sensitivity to the clausal level context is (only) observed when the alternatives are construed on the sentential level, in which case they are introduced by Focus; when a comparative can take scope inside a non-definite noun phrase, the alternatives are construed from the existential quantification and the comparison thus shows no sensitivity to the clausal content. Since in this theory the comparative can no longer take the standard phrase as a semantic argument, its impact on comparative semantics needs to be explained. I propose that the standard phrase is syntactically a coordinate and semantically associated with the matrix comparative clause through anaphora.

Abstract: Proper representation of semantics lies at the heart of every discipline that cares about meaning. This talk is an invitation to exploring how graph-based representation formalisms emerging in computational works can be of value to theoretical/empirical research. We will go over the motivation for taking this less trodden (or so it seems) path, consider the graph representation of some essential aspects of natural language semantics, and see how such representations can be constructed at a syntax-semantics interface.

Abstract: Expressions such as pronouns, definite descriptions, and demonstratives are interchangeable to some degree when it comes to referring to an entity that is salient and familiar in the discourse. However, these expressions are often discussed as separate semantic elements in the literature. In this talk, I propose a unified semantic account of these anaphoric expressions, where they share the same underlying semantic structure and only differ in the amount of restrictions that they carry. I discuss theoretical and empirical motivations for such an account in both spoken and signed languages. For spoken languages, I show that the analysis allows for a unified account of a number of independently observed phenomena across languages. For signed languages, I show that it greatly simplifies the semantic analysis of pointing that is used for referent tracking.

Abstract: In this talk, I develop an update semantics with the resources for dealing with anaphora, negation, epistemic modality, and their interactions. The theory is directly inspired by, and can be thought of as a natural successor to Groenendijk, Stokhof, and Veltman’s (1996) influential theory, but improves upon it in a number of respects: I argue that negation is classical, as in update semantics (Veltman 1996), and consequently that double negation elimination is valid. more ambitiously, the theory marries Veltman’s (1996) test semantics for epistemic modals with an anaphoric treatment of modal subordination by enriching the ontology of discourse referents to include anaphora to a state (i.e., a proposition-assignment pair). novel empirical evidence is presented in the form of examples which i dub possible bathroom sentences, such as “Maybe there is no bathroom, and maybe it’s upstairs”, which, due to the properties of negation in the fragment, and the treatment of modal subordination, fall out naturally.

Title: Which alternatives matter? A QUD-based approach to disjunctive questions.

Abstract: In this talk I will look into the relationship between different types of alternatives. Because disjunctive questions involve disjunctive alternatives, question alternatives, and, as I argue, also involve focus alternatives, they form a fertile testing ground for learning more about the division of labor between these. I will argue that the interpretation of these questions crucially come from effects of focus marking, not from the inherent alternatives often assumed for disjunction. To show how this works out, an account of focus and contrastive topic marking in questions is put forward in which f-marking in questions determines what constitutes a possible answer by signaling what the speaker’s QUD looks like. By imposing a congruence condition between f-marked questions and their answers that requires answers to resolve the question itself as well as its signaled QUD, we predict the right answerhood conditions for disjunctive questions.

Abstract: In this talk, I bring together studies from the literature and my own to develop a typology of scaleless quantificational items, and their associated implicatures. This typology — that builds on data from Ecuadorian Siona, Walpiri, Nez Perce, French, Spanish and English — reveals that scalelessness is either an obligatory side effect of the absence of a scalemate in the lexicon, or an arbitrary lexically-specified property. In addition, I argue that implicature can, but need not, be grammaticalized. While the presence/absence of grammaticalization is rather difficult to distinguish for scalar implicatures, it leaves a clear pattern in the case of scaleless implicatures. This work thus offers a new perspective on theories of scalar implicature, that are divided on whether or not implicature should be grammaticalized. It also uncovers new empirical ground on which to test these theories.

Talk: Natasha (Rutgers University). The Syntax and Semantics of “have gotten”.

Feb. 8, 2019
Lydia Newkirk: The subjunctive in Italian adjuncts (and elsewhere) 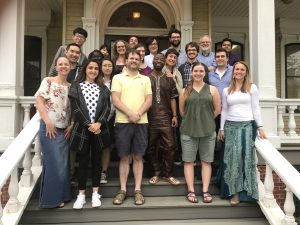